Carolina In The Morning 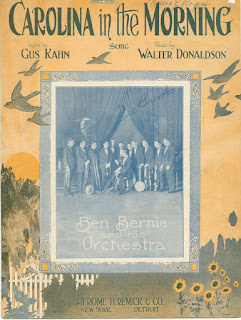 "Carolina in the Morning" was written way back in 1922 but it remains a popular song nearly 100 years later! The list of artists who have sung it is long, including Al Jolson, Danny Winchell, Bing Crosby, Dean Martin, Jimmy Durante, Dinah Shore, Judy Garland and Danny Kaye. It has been featured on shows like "I Love Lucy," "My Three Sons" and "The Dick Van Dyke Show."

The song was written by Gus Kahn (words) and Walter Donaldson (music), neither of whom lived in the Carolinas, oddly enough! It debuted on Broadway in 1922.

Since we are from South Carolina, we personally think the lyrics are quite appropriate!

Available on "Joyful Harps Encore!" or as an MP3 download.