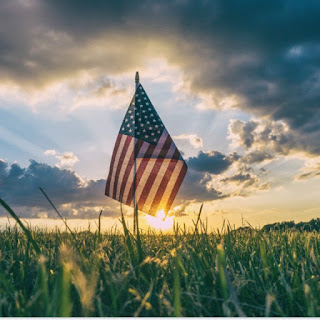 Breathes there the man with soul so dead
Who never to himself hath said,
"This is my own, my native land!"
Whose heart hath ne'er within him burned,
As home his footsteps he hath turned
From wandering on a foreign strand?

This was obviously not even a question for Katherine Lee Bates.  After a visit to Pikes Peak, CO in 1893, the words to America the Beautiful came to her. They were first published as a tribute for July 4th celebrations and later put to several tunes.

The most enduring tune was composed in 1882 by Samuel A. Ward, an organist and choir director. Just as Bates had been inspired to write her poem, Ward, too, was inspired. The tune came to him while he was on a ferryboat trip after a leisurely summer day and he immediately wrote it down. Supposedly, he was so anxious to capture the tune in his head, he asked fellow passenger friend Harry Martin for his shirt cuff to write the tune on.

This song celebrates not only the beauty of our land, but also the men and women who built our nation—the pilgrims who opened the way, the heroes who fought for liberty and the patriot whose timeless dream "sees beyond the years."  God has given us all three - and has truly shed His grace on America!

America the Beautiful is available on our Joyful Harps Encore! CD or as a download from Amazon or iTunes.
Posted by Heather at 10:48 AM